Eternal Sunshine of the Spotless Mind

What's it like inside Charlie Kaufman's head? You have to wonder. It's not as if he doesn't continually open it up on the page—literally or metaphorically, I'm honestly not sure which. There's the door into Malkovich, the running down of memories in Eternal Sunshine, the replicated lives of Synecdoche, the self-reflective autobiographical fantasy of Adaptation. He does it again, or variations of it—whatever it is—in Anomalisa, I'm Thinking of Ending Things, and even his novel Antkind.

It's a fascinating place. I wouldn't want to live there. 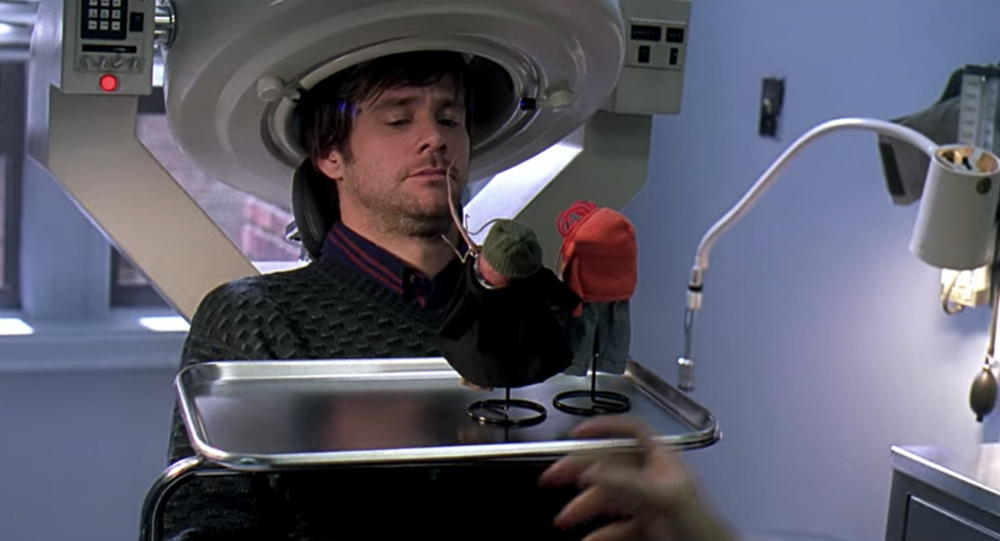 Well, technically, the procedure itself is brain damage, but on a par with a night of heavy drinking. Nothing you'll miss.

Eternal Sunshine of the Spotless Mind tells the story of Joel Barish, whose girlfriend Clementine Kruczynski has had him erased from her memory. In response to being erased, Joel has the same procedure performed on himself to remove his own memories of Clementine. The bulk of the story takes place within Joel's head as old memories are erased one by one and as Joel changes his mind and starts fighting back against the process.

The nature of this thing is to be a fragmented, non-linear jumble that jumps back and forth between disordered memories and the present, with interventions from Joel's subconscious as it tries to rewrite its world.

The story does give us some natural break points that we can consider as a traditional three-act structure, although the first and especially the third acts are shorter than usual. The first act begins with a lengthy future-as-prologue segment that chronologically takes place in the aftermath of the procedure, and which is revisited in the third act. The second act is the procedure itself, which breaks neatly into two parts at the moment Joel decides he wants to call the whole thing off.

The neat trick that gets played here is that we see memories as they are erased in reverse chronological order, starting with the most ugly ones of a relationship well into its toxic phase. But as these most recent memories are lost, Joel falls more and more back in love with Clementine until that one perfect moment on the frozen Charles. This leads to an even more chaotic second half as Joel and Clementine zig and zag through his own mind, trying to hide in his childhood and in his deepest humiliation and shame.

That’s such a Charlie Kaufman thing to do. 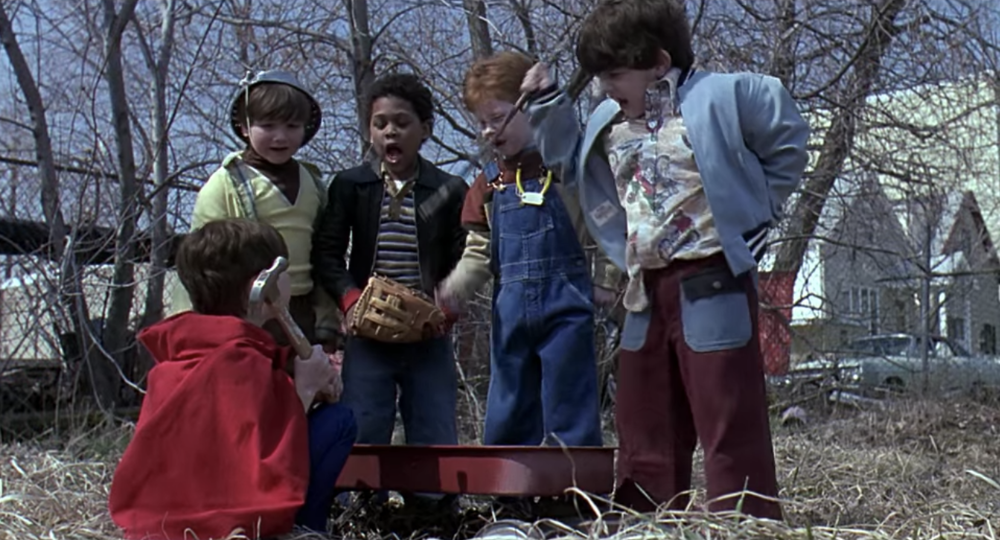 Of course director Michel Gondry also played a big part in the magic of Eternal Sunshine, and he gets a story credit as well. The practical effects and clever production design go a long way to bringing to life the chaotic dreamscape of the story, which shifts seamlessly from place to place, from reality to memory to imagination, from anger and confusion and despair to self-awareness and forgiveness and even love.

Joel and Clementine are deeply flawed characters. She can be charming and vivacious, but she’s also volatile and easily offended. Her reliance on alcohol does her no favors. Joel has an intelligence that can cross the line into arrogance, and also an innate cowardice that prevents him from fully committing to the relationship or even to life. They’re perfect for each other, if only they could get it right. It’s also easy to argue that their relationship is doomed from the start, and probably from the restart as well.

The story is masterful in its characterizations and in giving these people well earned arcs. It's not just Joel and Clementine, but also Patrick and Stan and Howard and Mary who all have to deal with the repercussions of the technology and what they've done with it, and what a mess it's made of their lives. It's Mary, in fact, who seems like a relatively inconsequential character at first, who gets the big late twist that puts the exclamation point on what a bad idea this fancy new technology is. 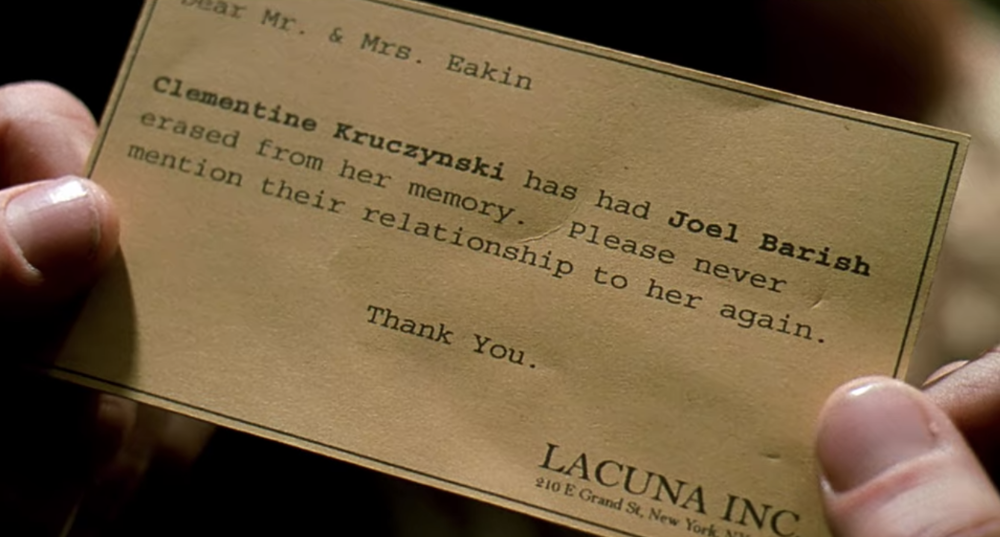 The heart of the story, though, is Joel and Clementine, and rooting for them to fall back in love, whether that's a good idea or not. Lots of credit here goes to Kate Winslet and Jim Carey for making such difficult people so appealing.

Look, man, I'm telling you right off the bat, I'm high maintenance. So I'm not going to tiptoe around your marriage or whatever it is you got going there. If you want to be with me, you're with me.

So make your domestic decisions and maybe we'll talk again.

She goes back to stacking. Joel stands there helplessly.

I just think that you have some kind of ... quality that seems really important to me.

The scene is disintegrating. Clementine's speech is delivered without passion.

Joel, I'm not a concept. I want you to just keep that in your head. Too many guys think I'm a concept or I complete them or I'm going to make them alive, but I'm just a fucked-up girl who is looking for my own peace of mind. Don't assign me yours.

I remember that speech really well.

I had you pegged, didn't I?

You had the whole human race pegged.

I still thought you were going to save me. Even after that.

It would be different, if we could just give it another go around.

Remember me. Try your best. Maybe we can.

The scene is gone.

It's interesting to compare the script to the completed film. The shooting script that we have access to seems relatively close for a lot of the second act—the part where things get crazy—but there's a lot especially in the first act of the script that comes off as a bit indulgent. There's a lot of talking that doesn't seem to move anything forward at all. It wouldn't fly in a spec script from an unknown writer, but when you're coming off Being John Malkovich they cut you some slack. Anyway, it plays much better and faster in the film after final edits and whatever improvisational changes came about from Carey and Winslet.

The only thing that was lost from the screenplay that might have been worth keeping—and really, it doesn't hurt the story that it didn't make the cut—is the bit that implies Clementine is a regular visitor to Montauk, which would answer the continuity question some people have about how she would have known to go there to meet Joel after the procedure. The short, subliminal answer: she didn't know, but he knew she was going to be there anyway.

I can't see anything that I don't like about you. 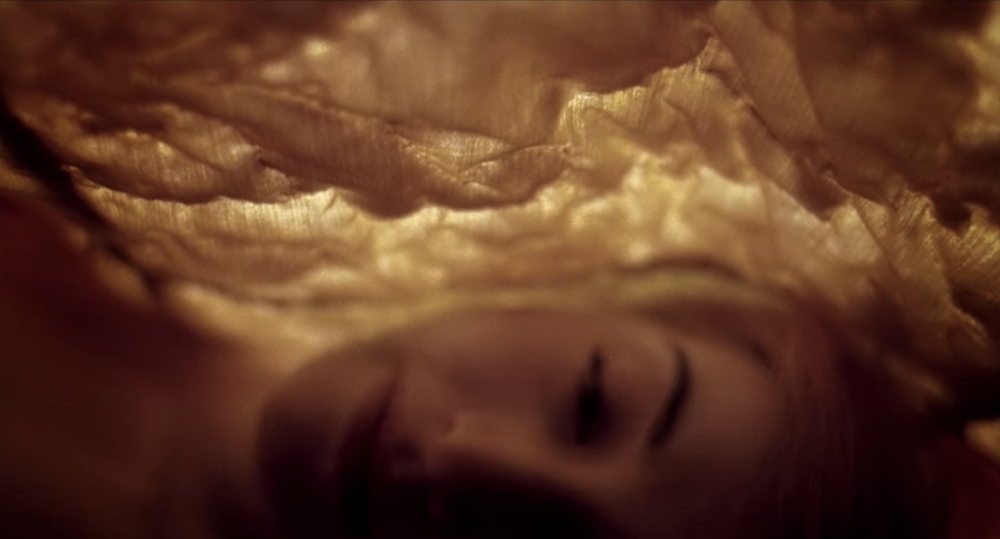 I'm sorry if I came off sort of nutso. I'm not really.

It appears as if this is my first entry in two years. 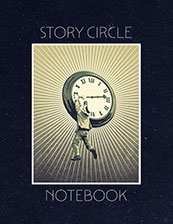